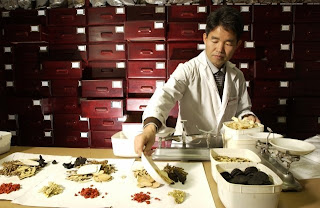 Traditional Chinese Medicine (TCM) is a modality used by Naturopathic Doctors in clinical practice.  It combines acupuncture, herbs and nutrition to bring balance to individual patients and thus expel disease (which is said to be caused by an imbalance).

TCM has often promoted the idea of cooked foods and often links eating too many raw foods to certain disease patterns.  Because I study TCM, I was always fascinated with this take on the raw foods diet, considering I found raw foods to be the only protocol that was able to bring about healing in my life.
My professor at school informed us that the reason a predominately raw food diet is not preferred is because the foods carry so much water and 'cold' in them, they are often hard on the Spleen and Stomach TCM systems that need to digest them.  Cooking was seen to pre-digest the food and allow the Spleen and Stomach an easier task.
That being said, I took this information to another TCM practitioner (who happens to be a raw foodist) and asked their opinion on this topic.  The TCM practitioner agreed that most raw foods are 'cold' for the body, but he also rationalized that they can be easily warmed with certain herbs and spices.  For example, adding freshly squeezed ginger to your juices and sprinkling cinnamon in your smoothies and desserts. Another option is adding cayenne, black pepper or turmeric to your entrees. These spices 'warm' the food without cooking it and make it suitable from a TCM standpoint for your Spleen and Stomach.

That being said, the best scenario I found in the winter is to eat raw foods for breakfast, lunch and snacks and then to come home and enjoy a nice cooked dinner.  Just because you eat raw foods for health doesn't mean you have to be 100% all the time.  In the summer it may be easy to be 100% raw, but in the winter you may need to make adjustments.  Just listen to your body and you can never go wrong!

Have a wonderful day!