One of Leslieville's best kept secrets is the weekly Leslieville Farmer's Market.  Every Sunday, the most adorable babies and puppies show up with their friendly parents to shop for organic, locally grown produce, dairy and meats as well as catch up with one another about the previous week.  This all takes place in the inconspicuous Jonathan Ashbridges Park, just off of Queen Street East.

A few weeks ago it was Baconfest at the market, which meant that a number of different vendors were offering their most delicious bacon-laden creations.  On offer was a bacon waffle and pulled pork sandwich, bacon and fruit crepes, bacon chocolate chip cookies, bacon bruschetta and even some vegetarian 'bacon' skewers.  Since bacon always seems to be a huge hit in any quadrant of the city, needless to say the Leslieville locals were delighted.

As M and I were making the rounds, buying up all the succulent peaches and apples in sight, M got a hankering for something sweet.  After much perusing, she finally decided on a double chocolate brownie that was made with spelt flour, in lieu of the traditional wheat flour.  After sitting down under an enormous tree to enjoy her treat, M turned to me and asked "What is spelt flour, anyways?".  It occurred to me that if M (who is vastly knowledgeable in nearly everything) was asking me, chances are a number of you would also like to ask me the same question. 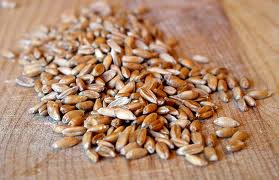 The facts:
Spelt is basically the ancient ancestor of wheat, kind of the 'pure and untainted' version.  Usually spelt has a lot less gluten and a lot more fiber, so you may find that many gluten intolerant people are able to ingest spelt on occasion (but again, not all. Spelt is a no-no for the Celiacs out there).  In terms of taste, spelt has a much nuttier, fuller flavour than regular wheat and I find it gives a nice weight to desserts/breads that benefit from being a bit denser.  So, if you do decide to experiment with spelt you may just end up adding an entirely new dimension to your cooking (not to mention the added health benefits)!

My challenge to you is: try something new, with someone new.  It may just end up being exceptional.

Have a wondrous day!