Lets End the Tyranny of Television 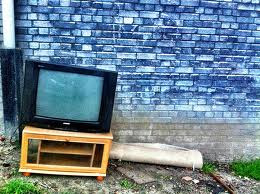 The best decision I ever made in my life was to stop watching television, although I didn't know it at the time.

Many people, my previous self included, have the misconception that watching hours of television every week is relaxing to their system.  I know, I know; you get home after a long day at work or school and all you want to do is veg-out in front of the magical box in your living room.  But did you ever consider the following:

1. Television disturbs your slumber.  The physical act of watching an illuminating screen not only causes eye strain but can also stimulate excitatory neurons.  Since most people watch television before bed, this can affect sleep and cause more stress on the body since most of our healing happens when we're snoozing.

2. Television eats up your time. You may find that you are even more stressed from watching TV because you were unable to get all of the other things done in your life that needed to get done!  Most shows are an hour long and in that time, you could have whipped up a gourmet meal and given yourself a facial--think about it.

3. Television promotes a sedentary lifestyle. Unless you're only watching television at the gym, chances are you're sitting on your couch.  Since the average American watches 4 hours of TV per day, this can really add up in negative exercise.  If you really want to be amused, perhaps do as the French do and walk to a cafe.  You can watch the people stroll by as you relax and drink a warm beverage.

4. Television retards your social skills and kills your imagination. The most fascinating people I know do not own televisions.  These are the people that are telling me about the new art exhibit, the new restaurant, their recent travels, the new fitness craze etc.  Lets shift entertainment to be something to enjoy in the company of others as this will help you become more socially rounded.  If you really must be alone, may I suggest a book? It will help foster your imagination, expand your vocabulary and transport you from the everyday stresses.